I love any kind of fancy woodwork, so at a library sale I picked up an old hardback book titled “The English Gypsy Caravan.” It was full of photos and illustrations of the fancy wagons made in England and Ireland around 1900 for prosperous gypsies and circus showmen.

I also love old trucks, especially the 1937 Chevrolets. One night I had a dream in which I was driving an old Chevy flatbed truck with a gypsy wagon on the back. The next day I was looking at old cars on Craigslist and found the perfect truck, the same as in my dream. 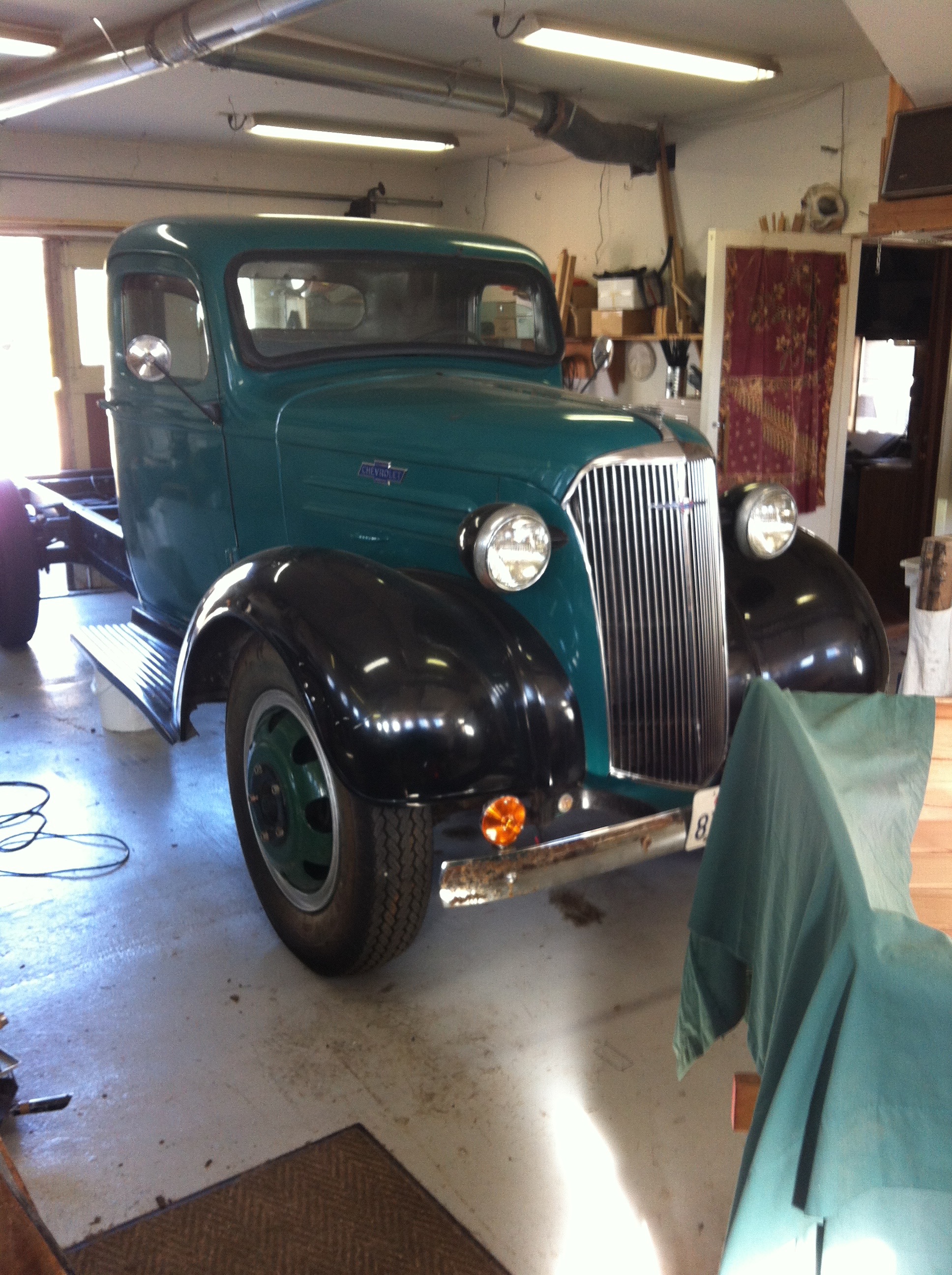 I bought the truck, a 1.5 ton flatbed with no bed, and had it towed home. The original 216 straight six engine was barely running, the block was cracked, and it was too small to haul what I wanted to build on the back of the truck. So I pulled it out. 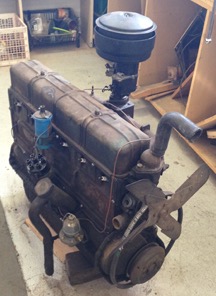 I found a 235 Chevy engine from a 1955 pickup on Craigslist. I rebuilt it and added electronic ignition and new manifolds for dual carburetors and exhaust. It more or less bolted into the 37 frame. 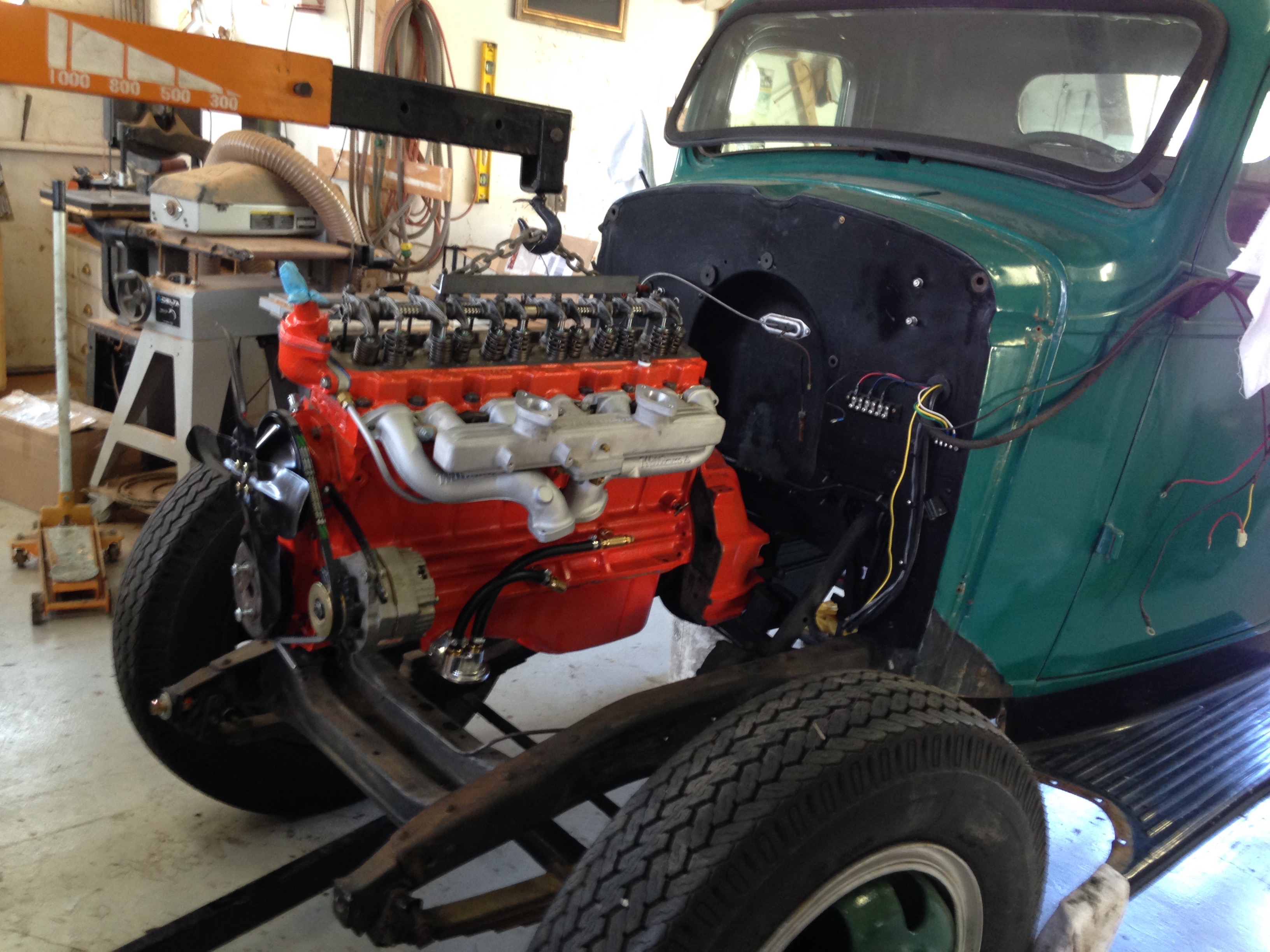 From an inch thick plate of aluminum I made an adaptor plate to graft a 1995 NV4500 Dodge transmission onto the back of the new engine. The new tranny had overdrive and I hoped it would get the old truck up to highway speeds. 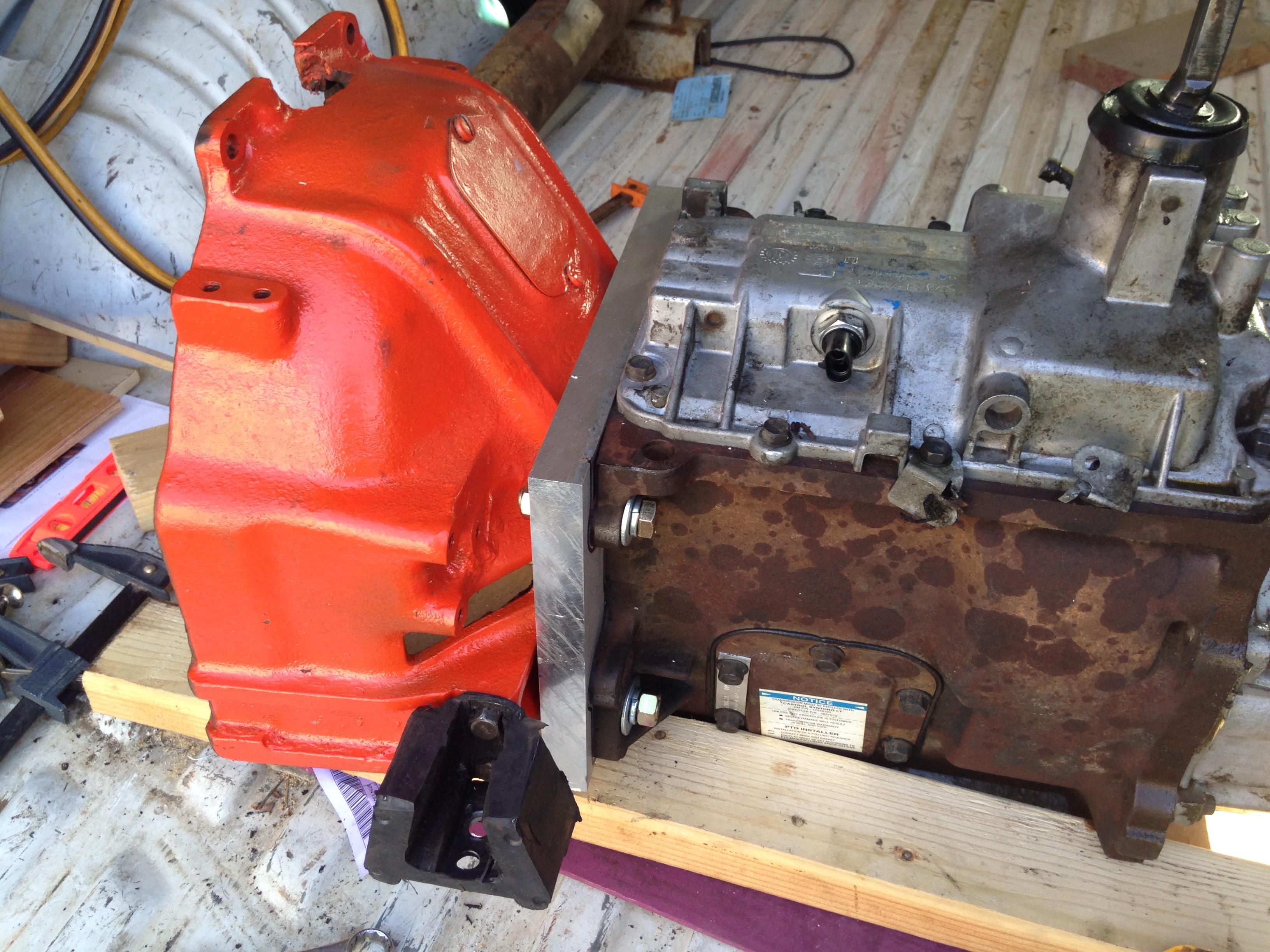 I scanned a drawing of the truck profile from the 1937 manual and started drawing caravan shapes on the back. It became clear that a “cab over” design was the best way to achieve the proper scale and proportions, coming up with something reminiscent of a Dunton Reading style wagon made in 1919. 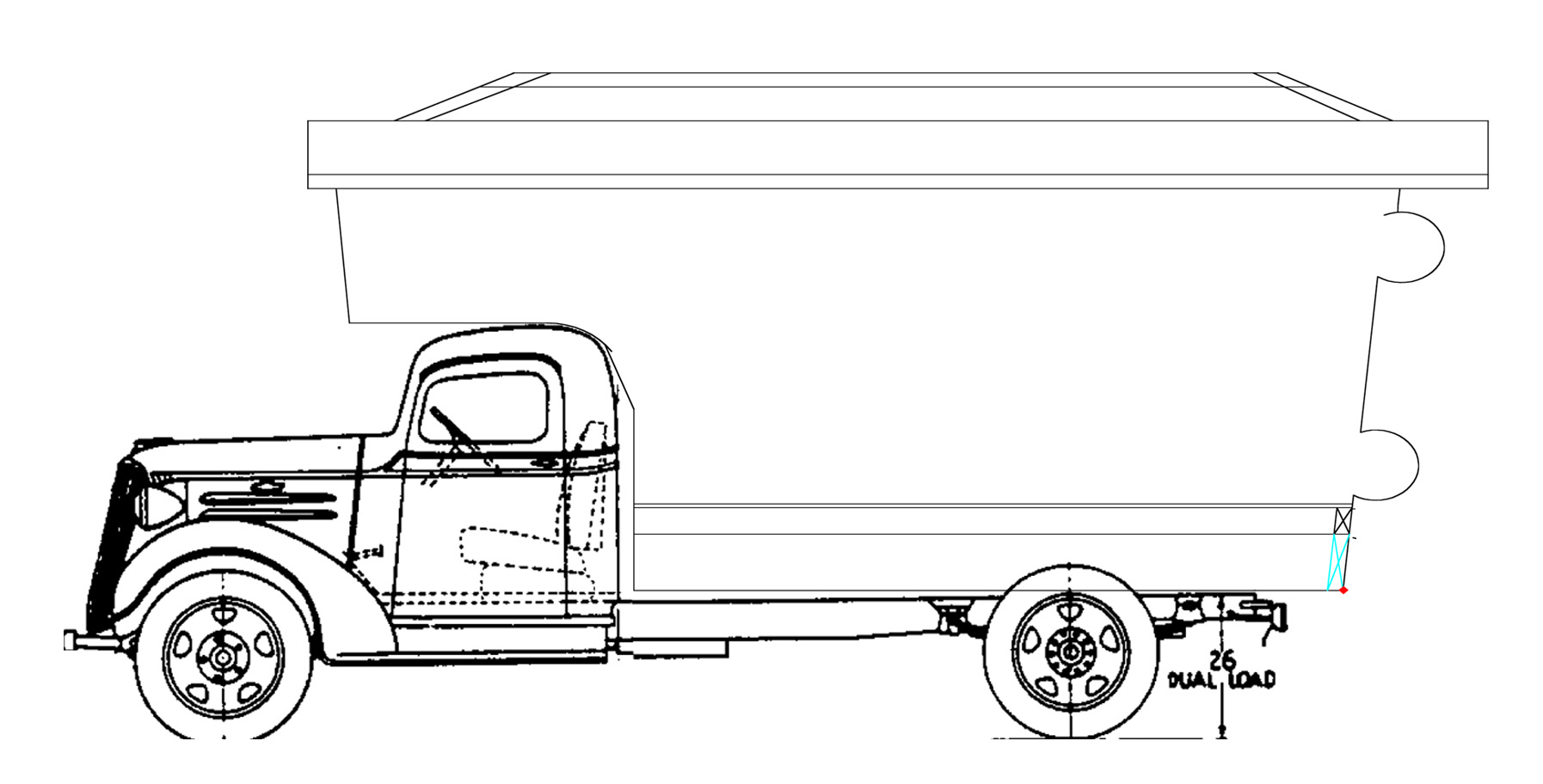 For the subfloor I used seven foot long 2x12s on 16 inch centers, with blocking over the frame rails. I had to go that deep to get over the giant 20 inch dual rear wheels. Each floor joist is bolted to the frame at two points with angle iron for a very solid connection. 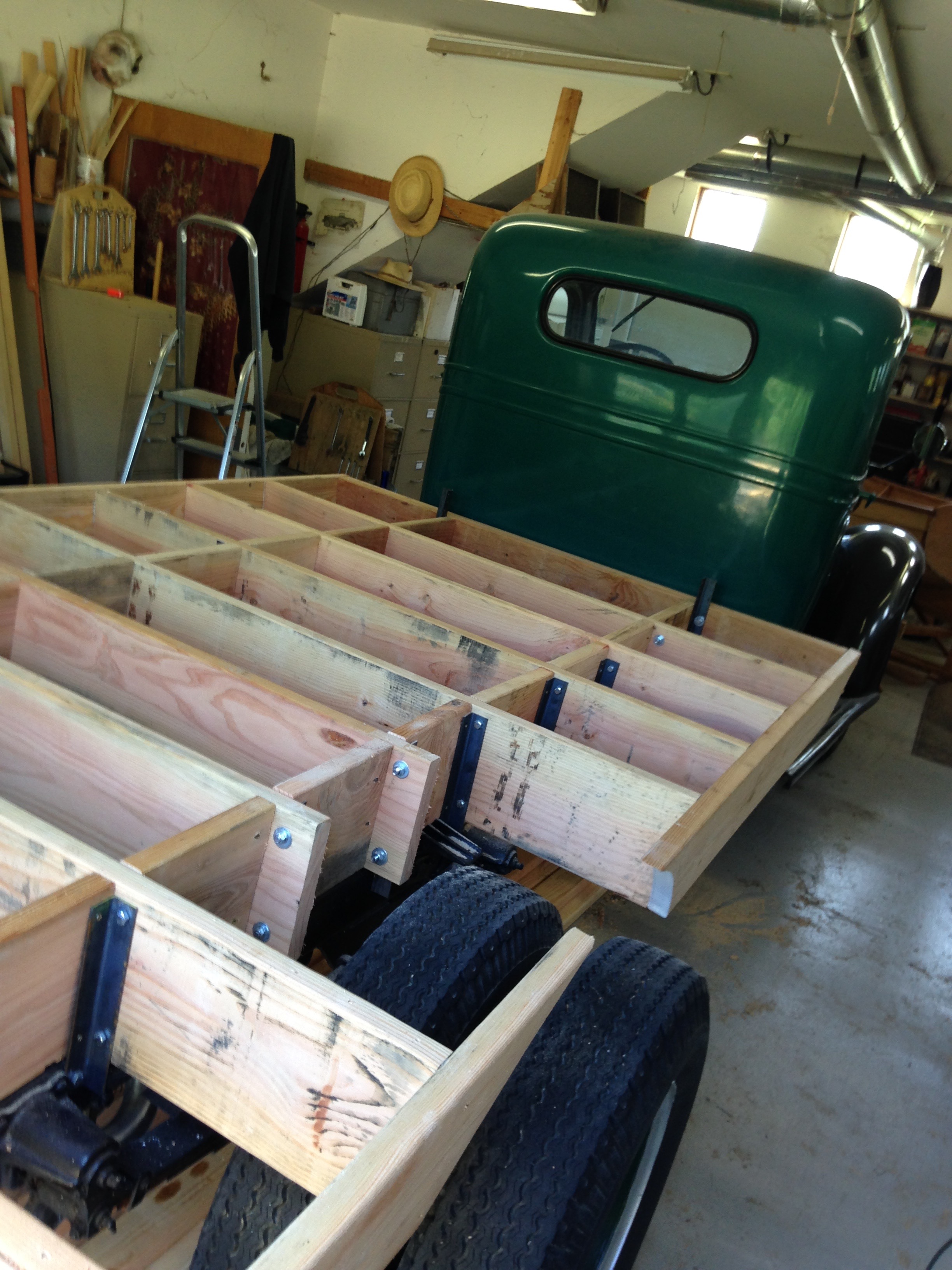 I covered the subfloor with aluminum sheet to keep road splash and insects out of the future living space. 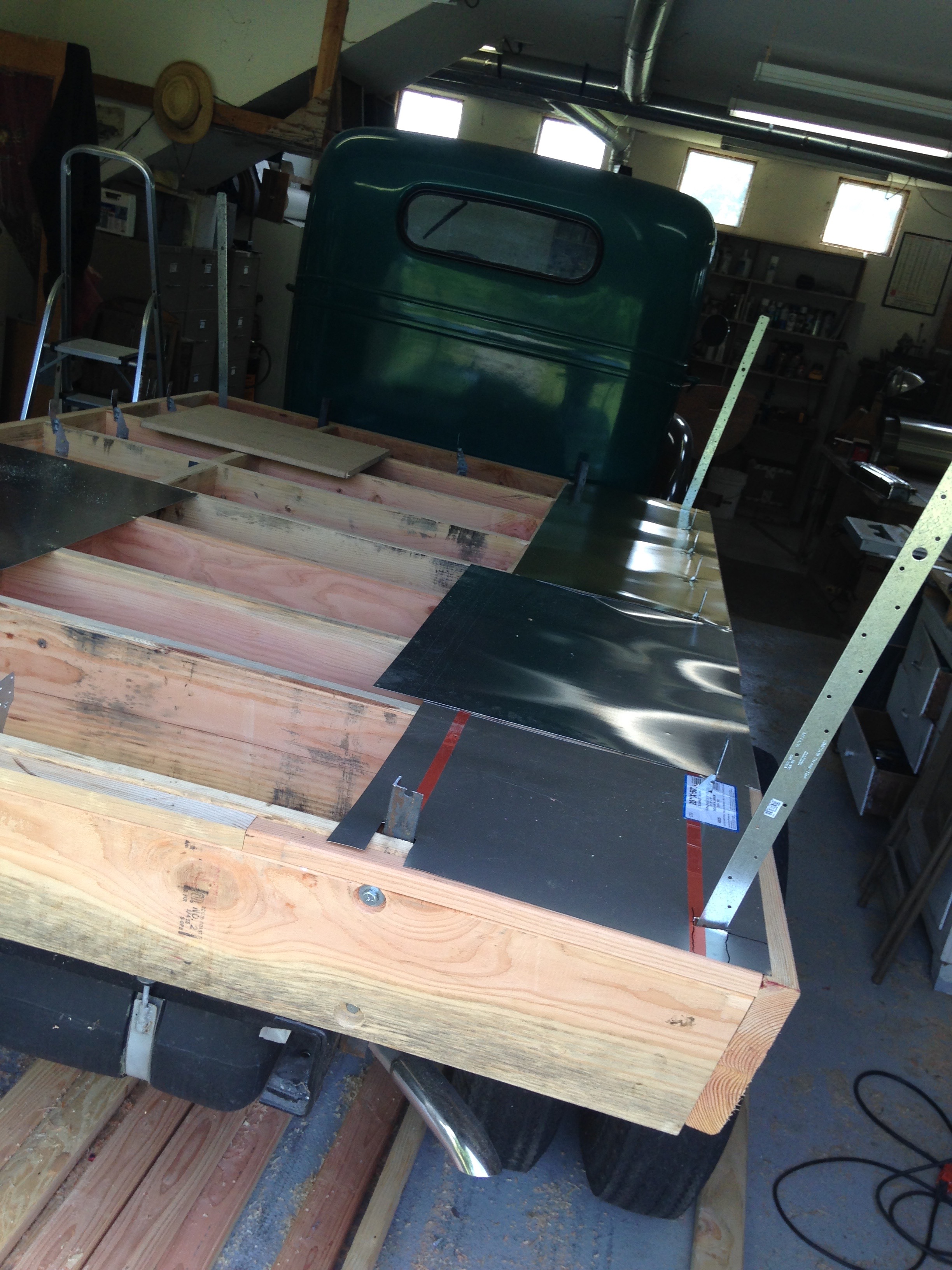 On top of the subfloor I built the finish floor, using 2×4 stringers running at 90 degrees to the subfloor joists. Solid foam insulation was put in the stringer bays. 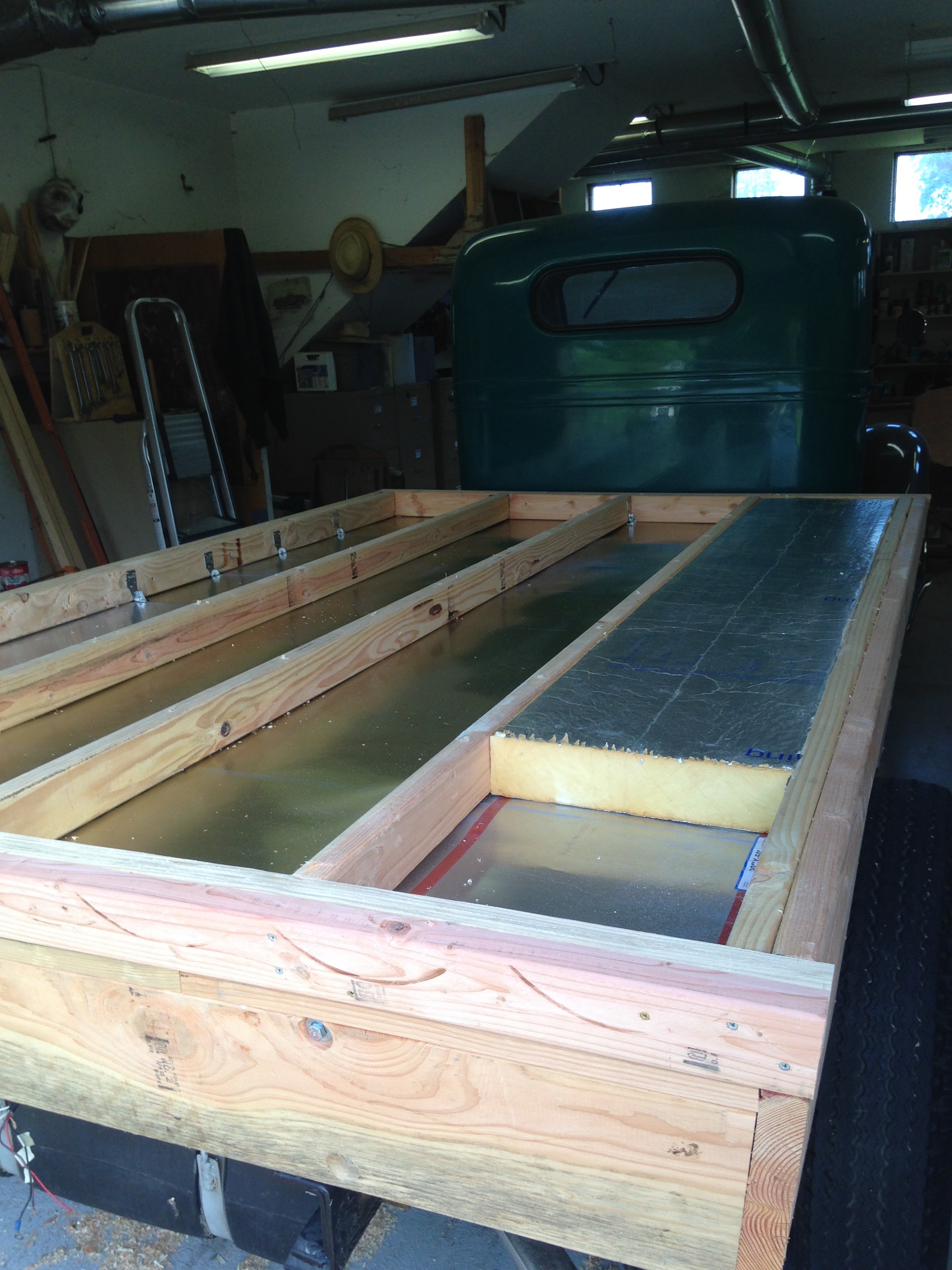 Here I am using a giant compass with a circular saw bolted to the end, cutting curved rafters from a sheet of 3/4″ plywood. 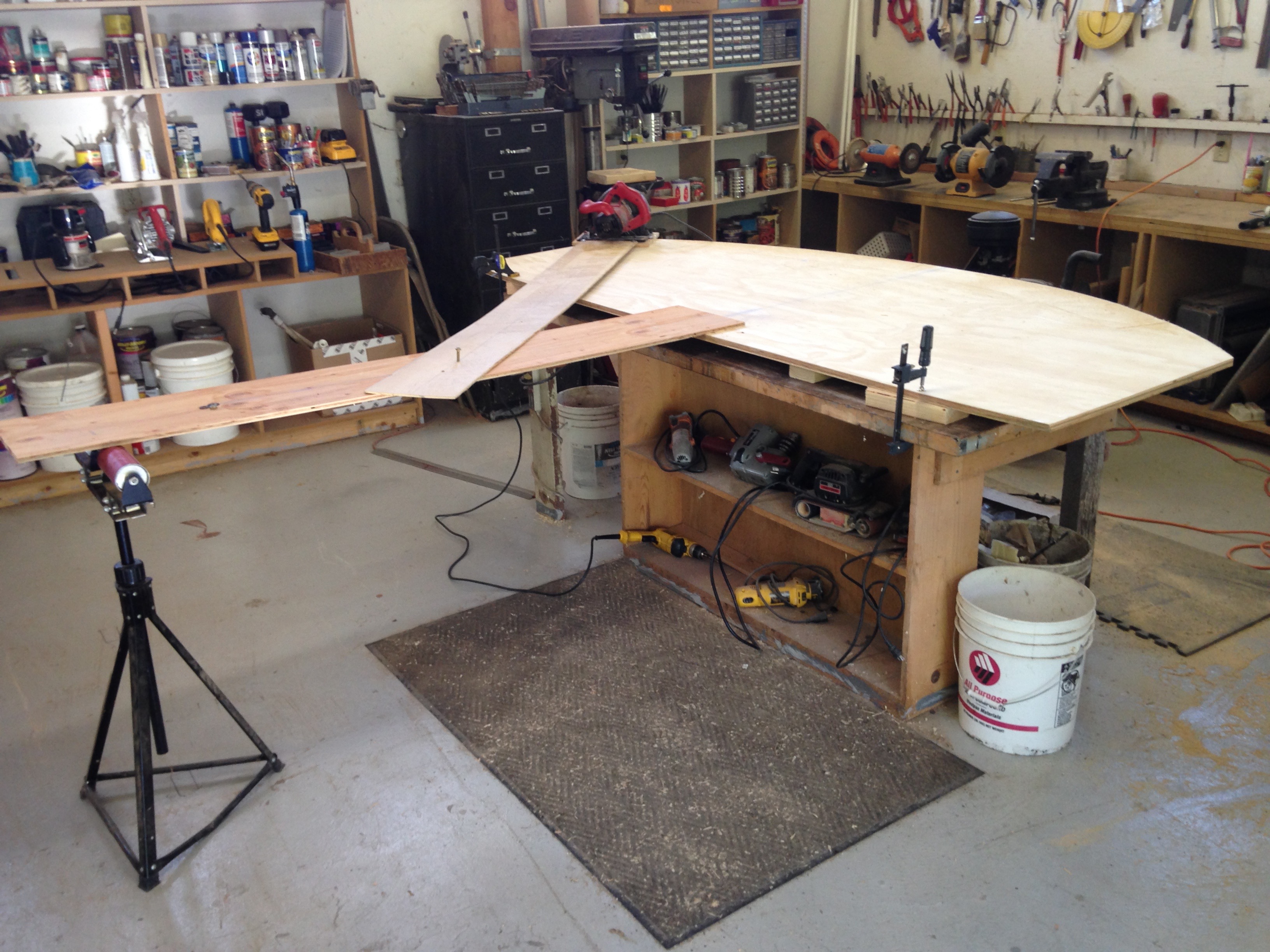 Roof rafters were 24″ on center. Each was made up of two pieces of 3/4″ plywood glued together. Light but strong. My idea was to build the structure heavy in the floor and light in the walls and roof, to keep the center of gravity low. 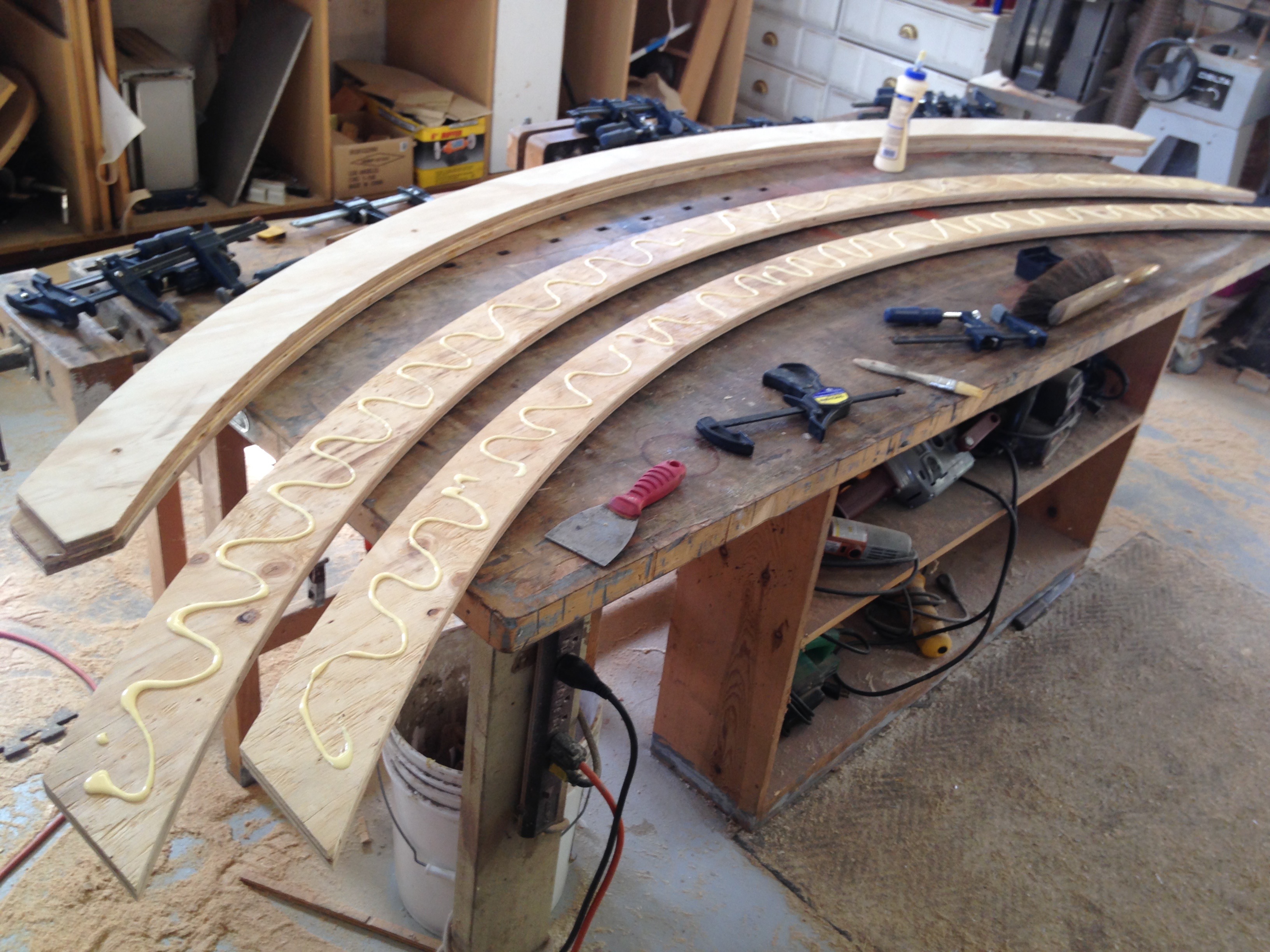 Here are front and rear walls framed up, with rafters tacked on to set the roof height. 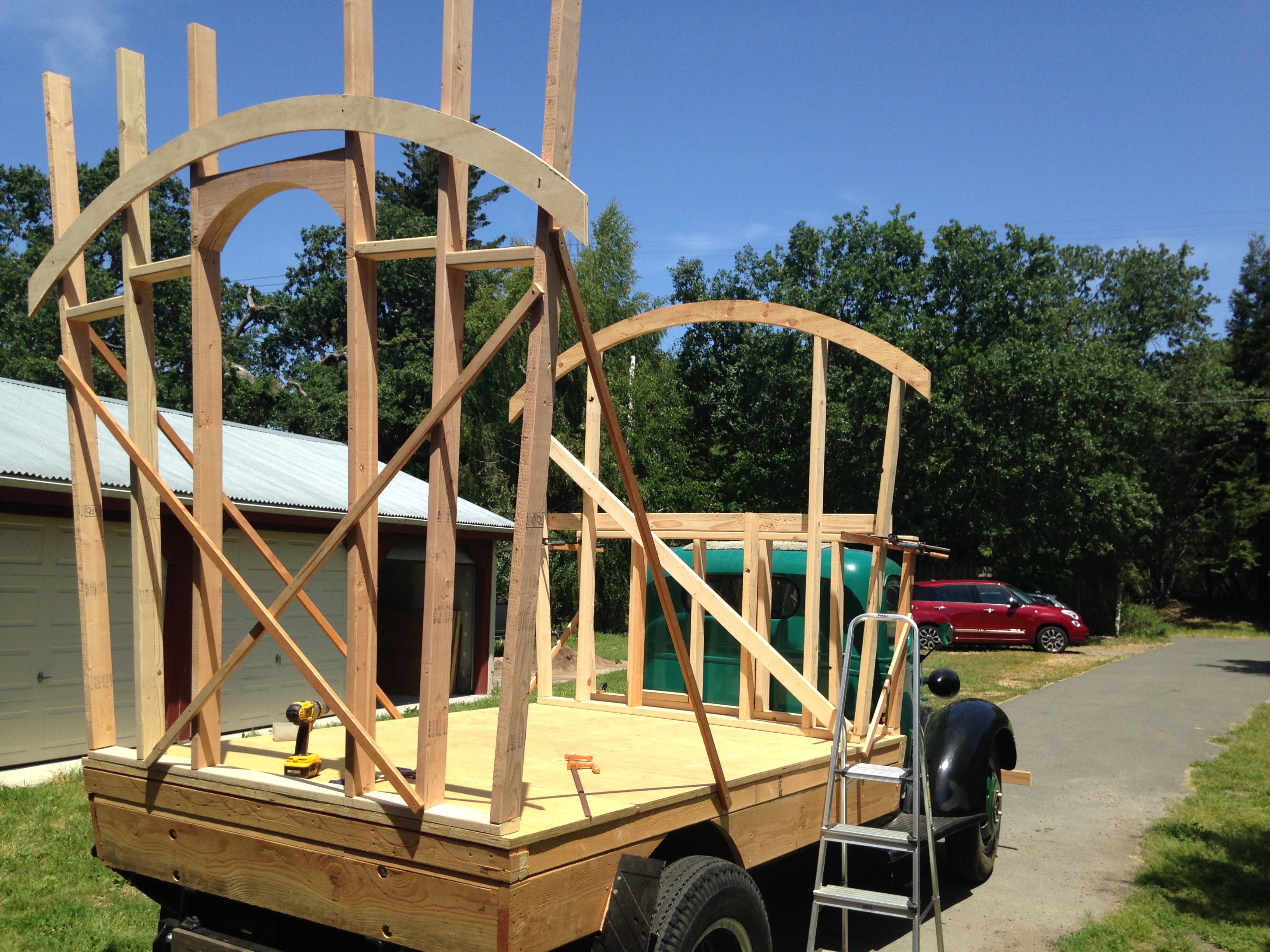 The wall right behind the truck cab is an important sheer structure that resists the tendency of campers to rack from side to side and rip themselves off the truck when you are going around corners. 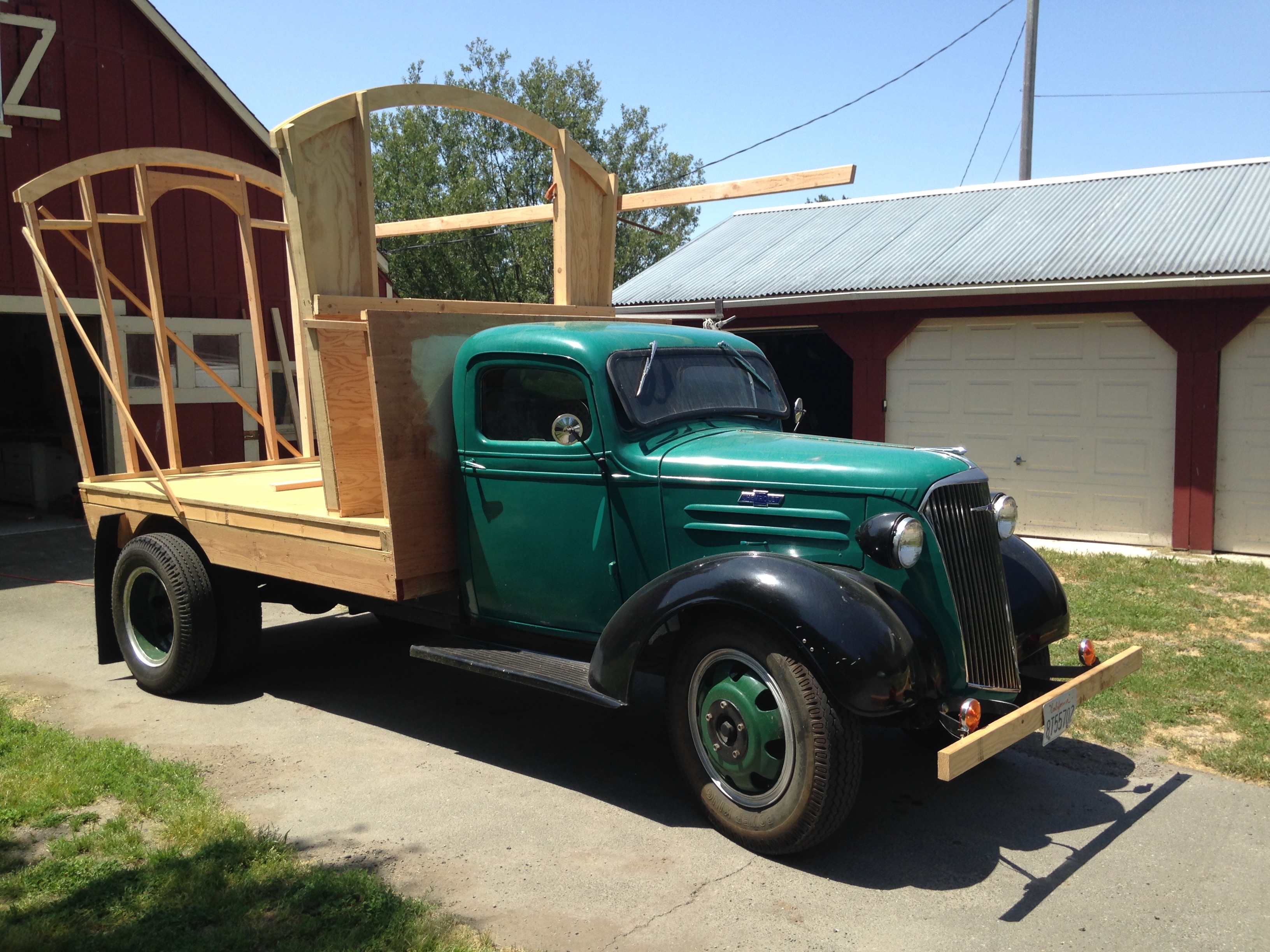 Here the cab-over portion takes shape as half inch plywood sheathing goes on.

Half inch plywood sheathing was glued and screwed to the studs, then door and windows cut out. The roof deck is just quarter inch plywood, but the curve gives it enough rigidity to walk on without deflection. Against the sky you can see the start of the skylight structure, called a “molliecroft.” It’s low and curved down to join the roof  at the front and rear so that you can drive underneath low branches without snagging. 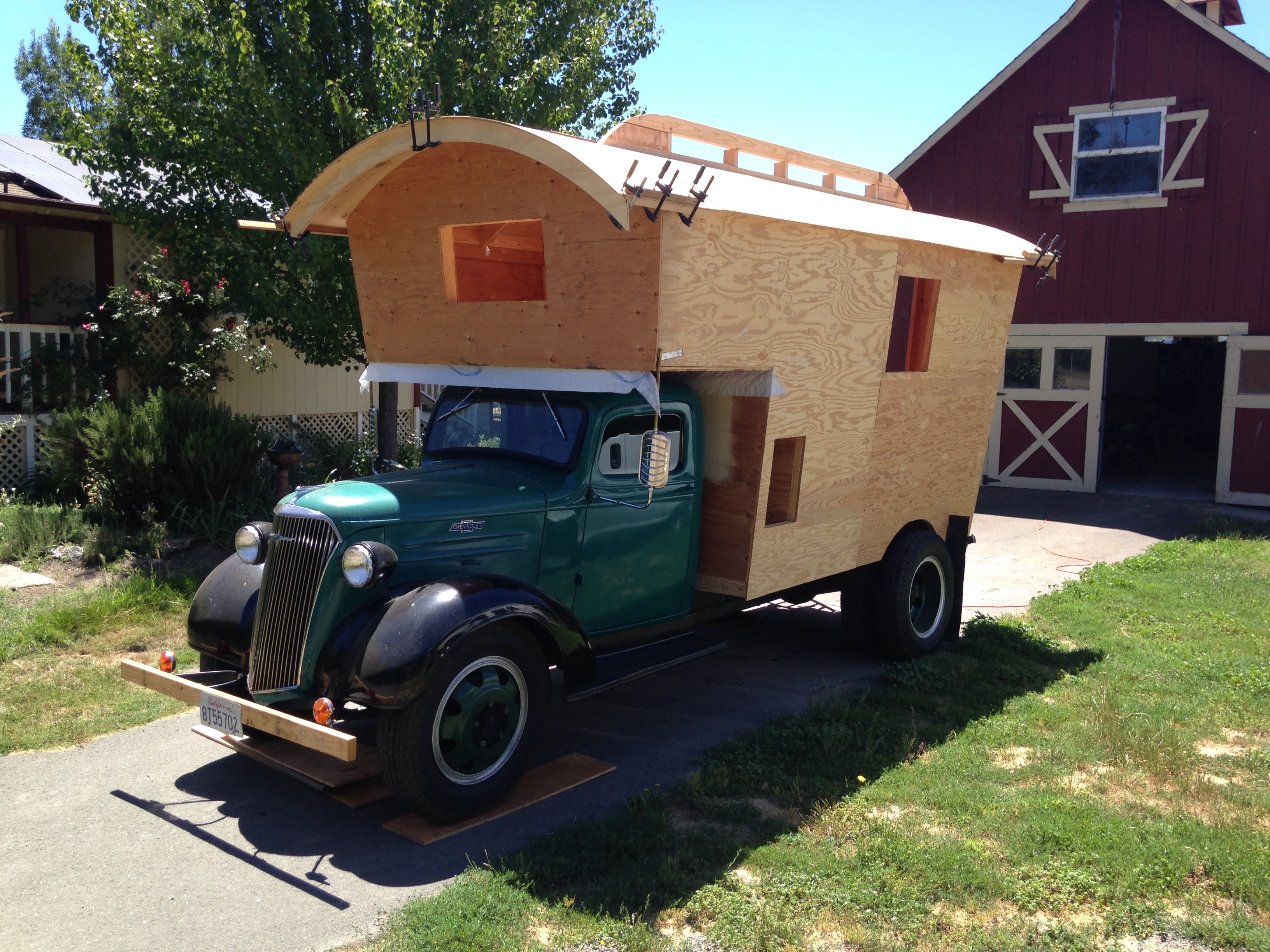 Roof cracks were sealed with Fixall and the whole roof was covered with fiberglass, just like a boat. Siding is solid beaded hemlock from a local planing mill. 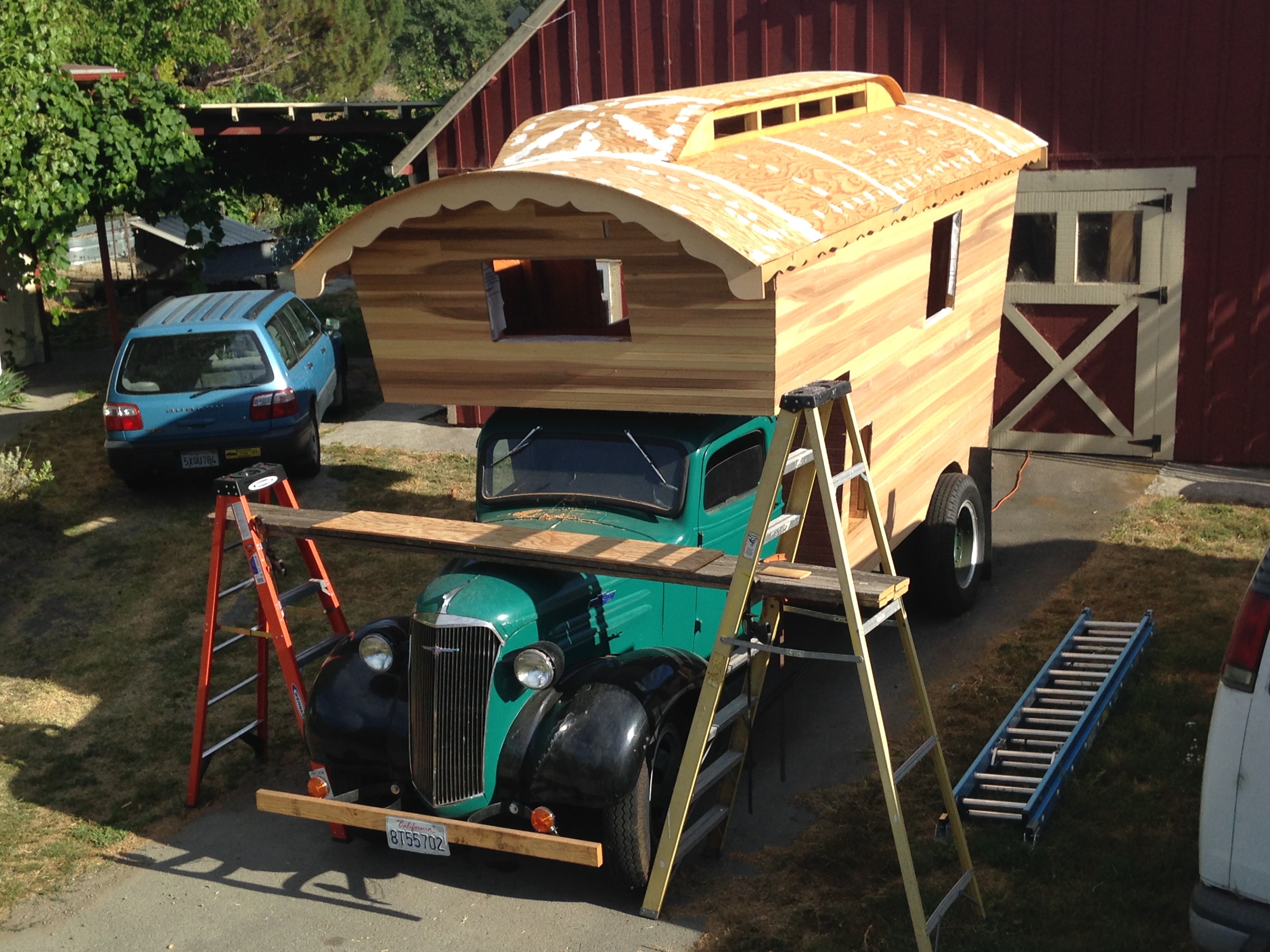 Here I’m gluing 2×8 basswood planks together to make a blank for one of the porch supports. 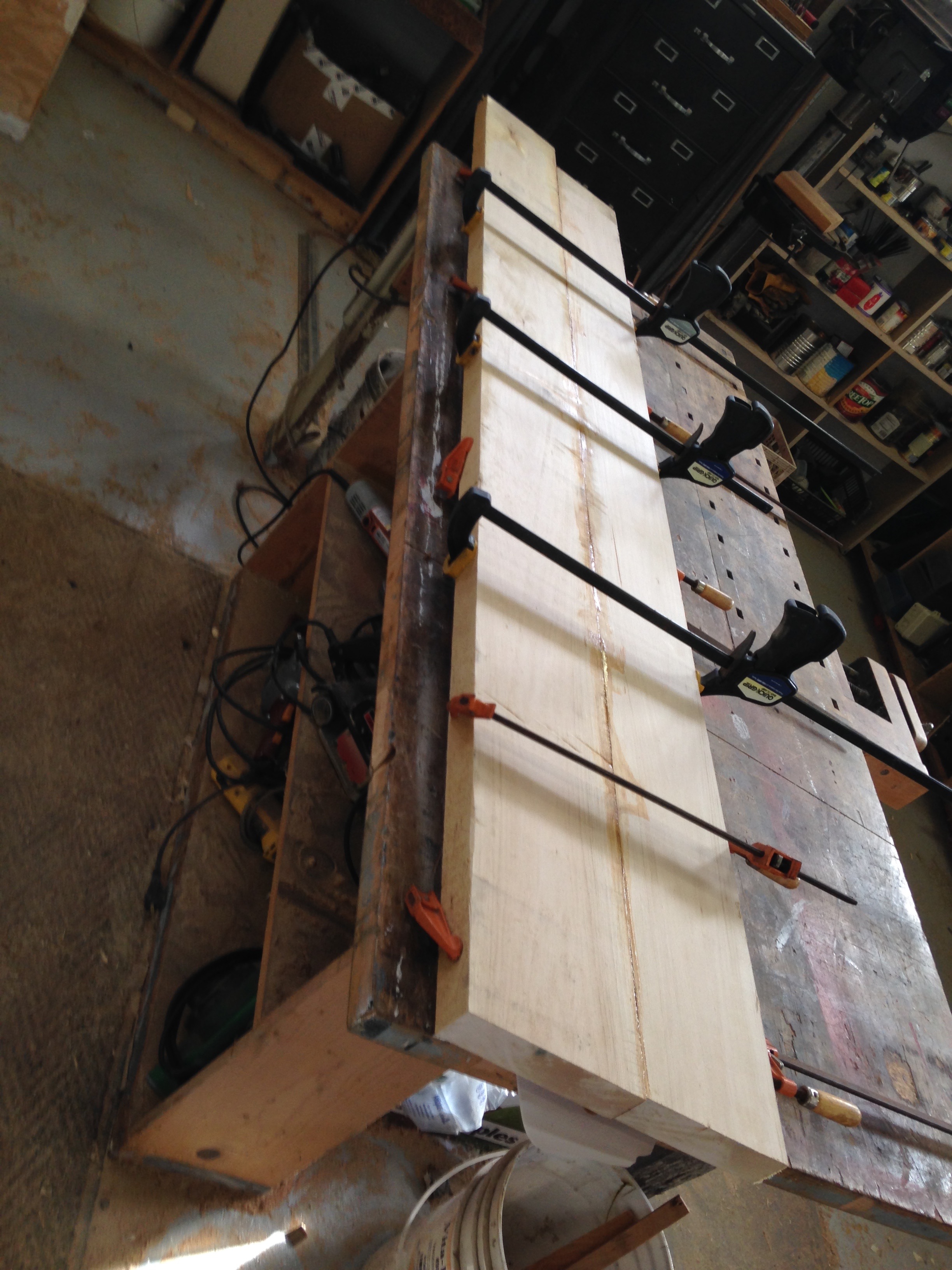 I drew a traditional acanthus leaf design full scale, pasted it to the basswood blank, and jigsawed out the rough shapes. 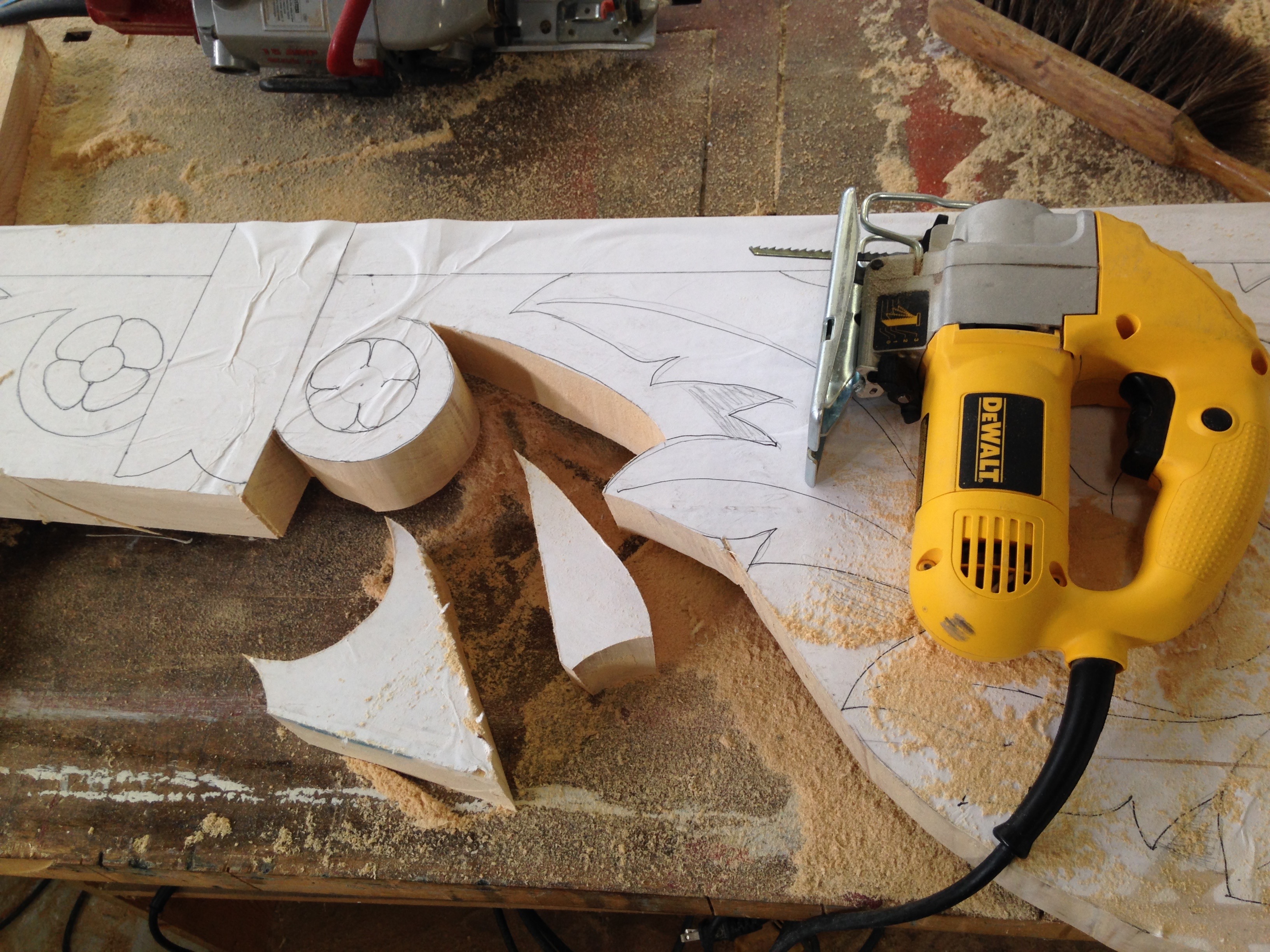 Then it was a matter of a lot of carving. 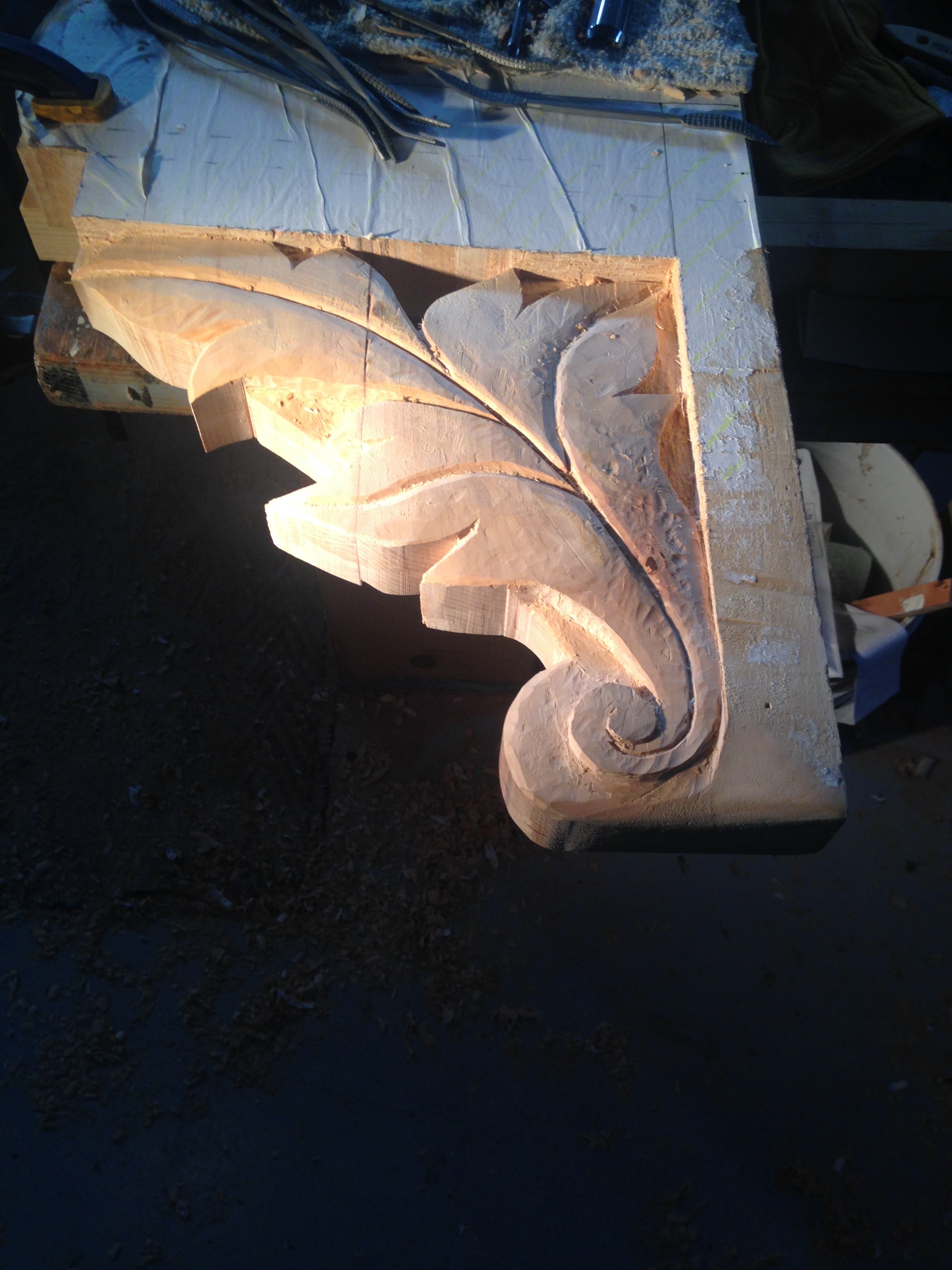 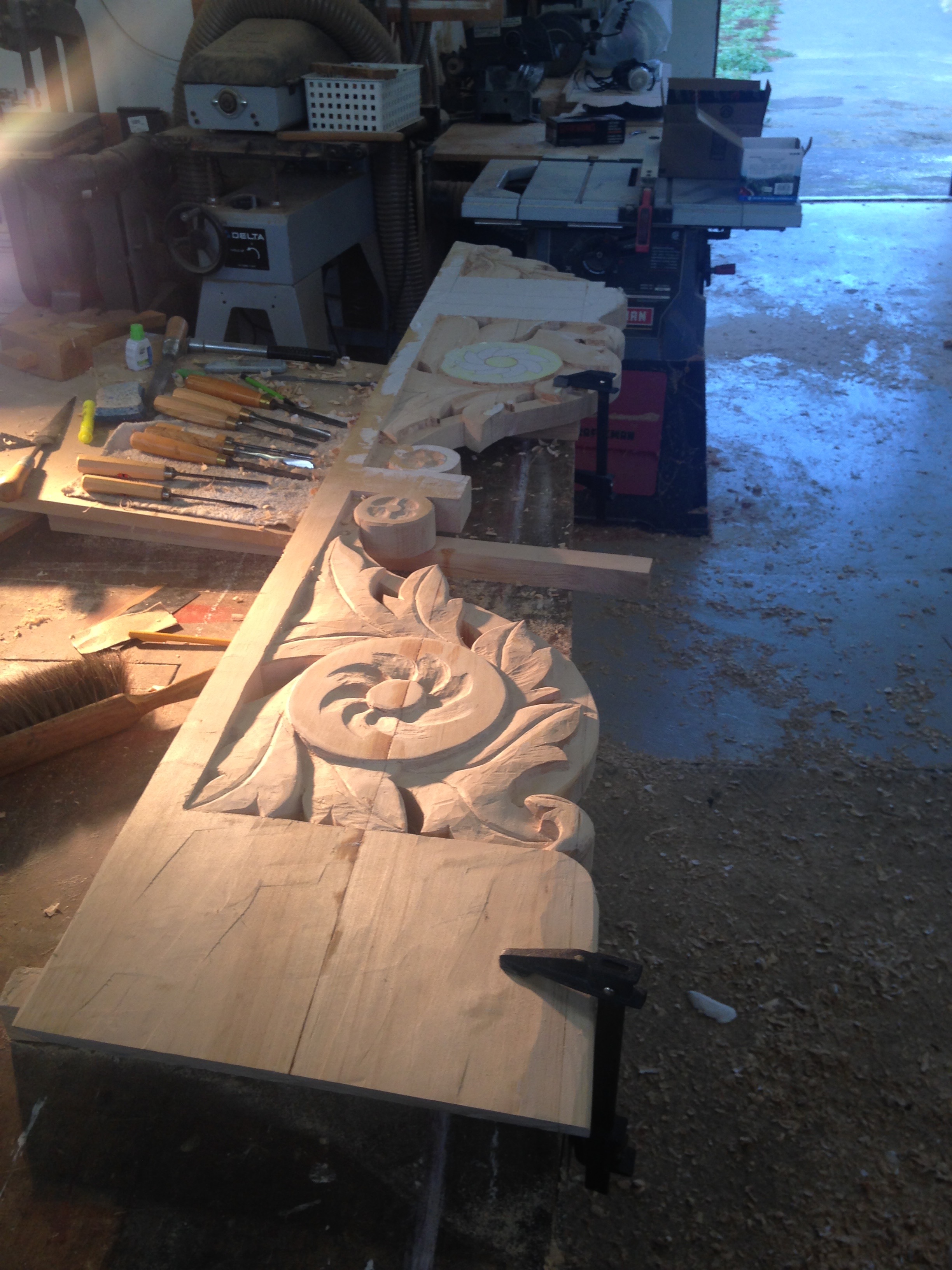 Sanding and painting and mounting on the drivers side of the porch. Now I have to start all over and make the passenger side porch support. 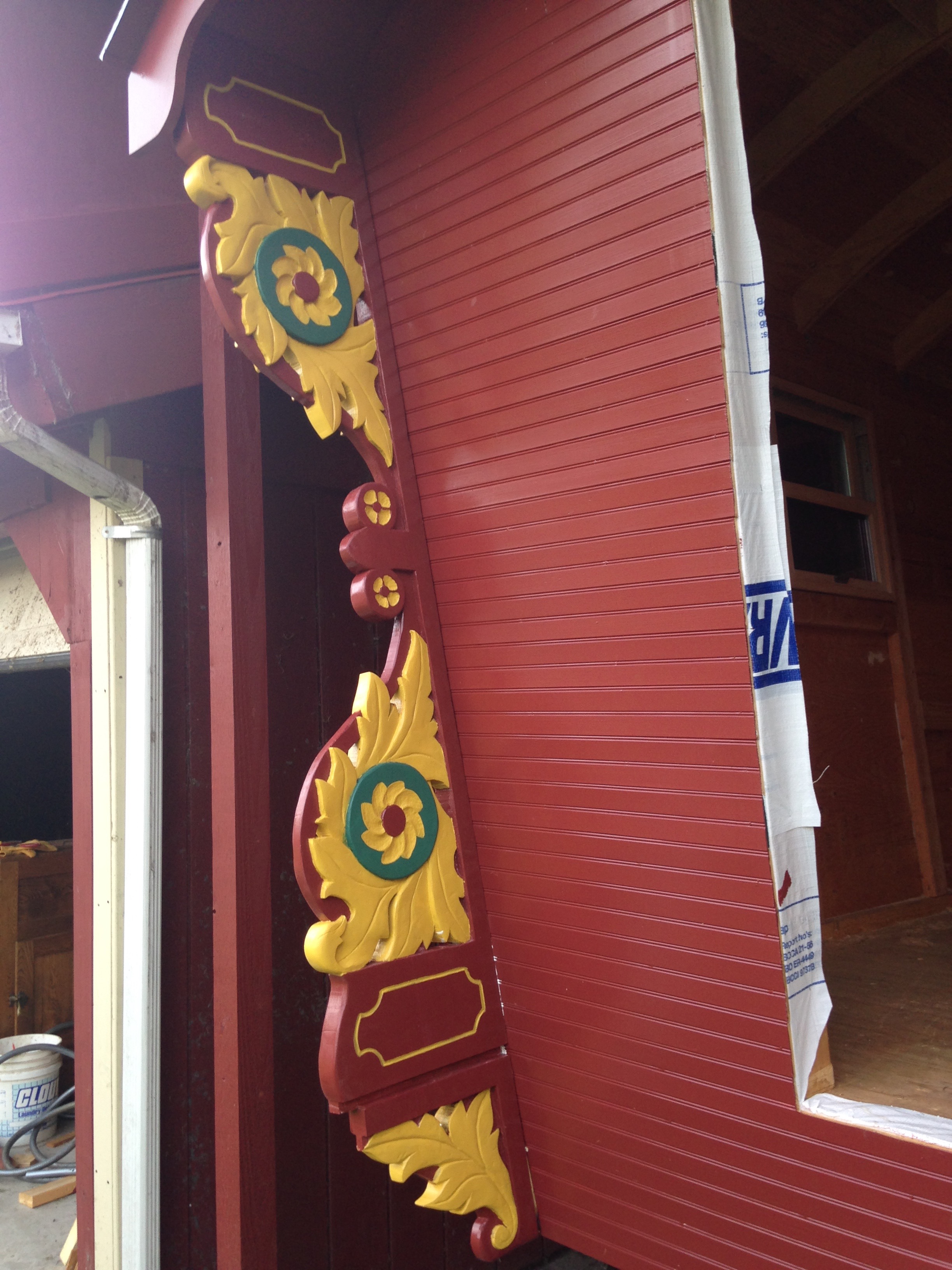 Making the stained glass window for the door. 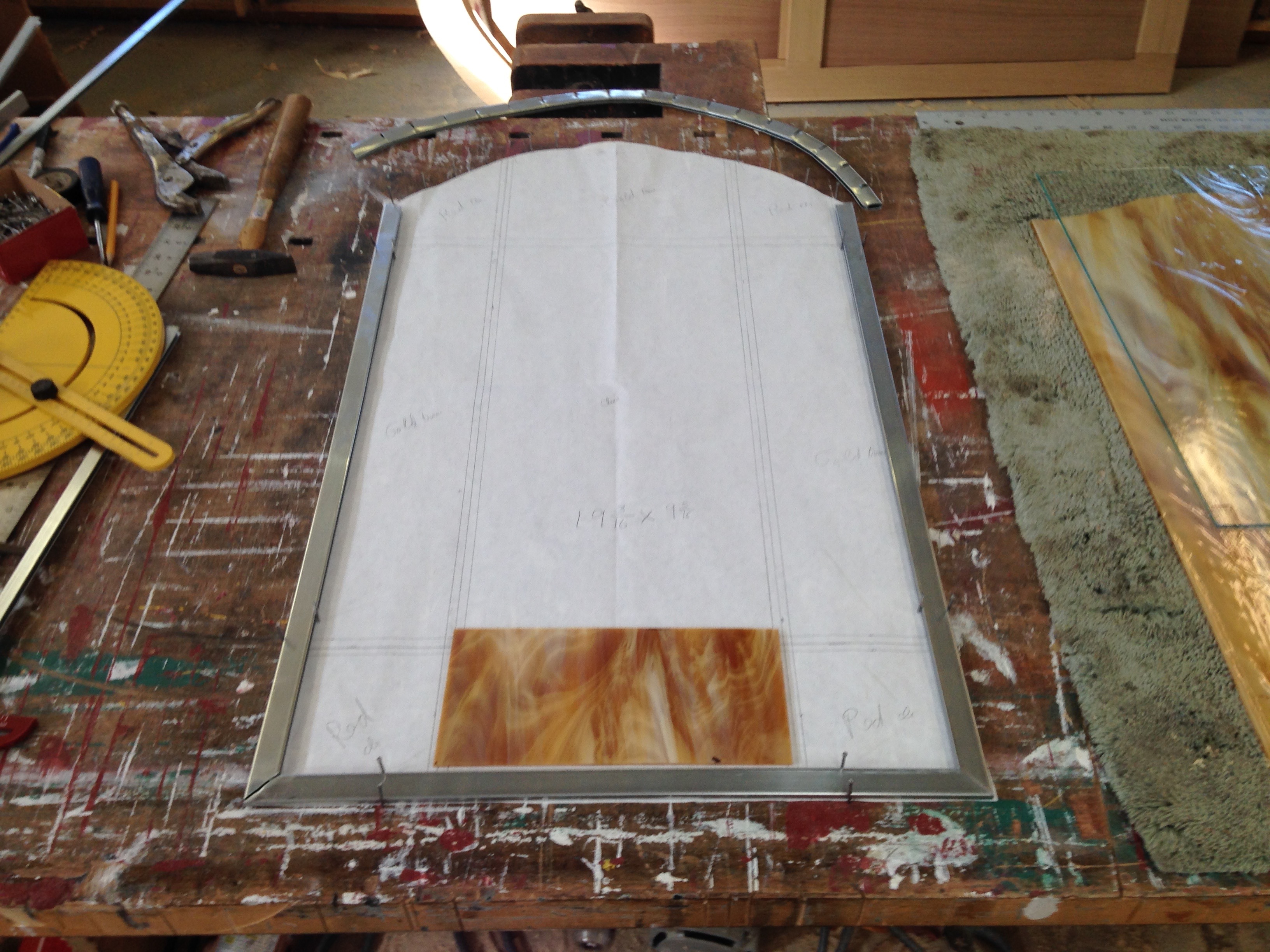 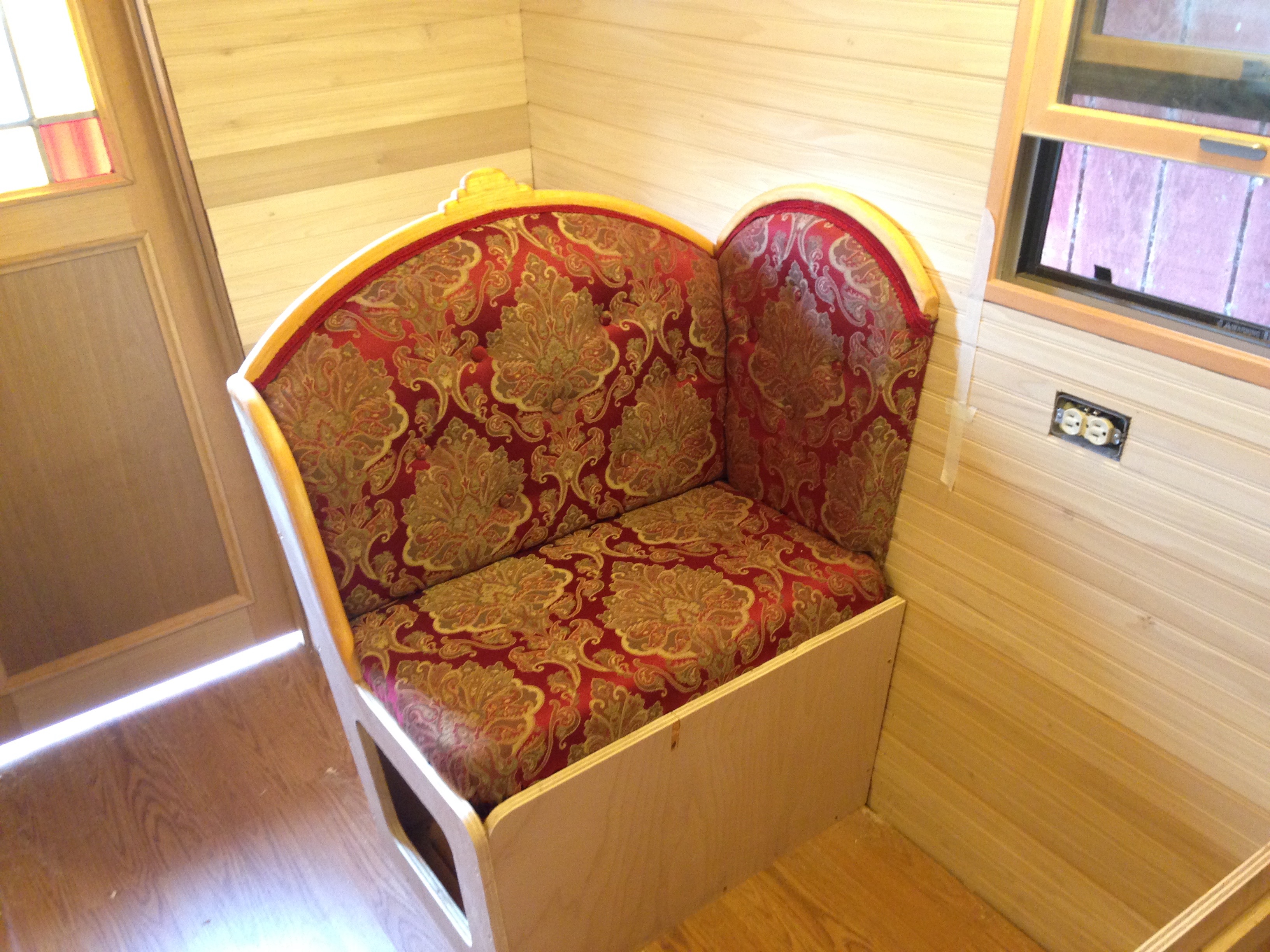 The stairs are hinged to the porch. They fold up and fasten over the door for traveling. Milliecroft windows are golden stained glass. The long horizontal trim and chamfered battens are purely decorative, as are the real but nonfunctional shutters on either side of the windows. 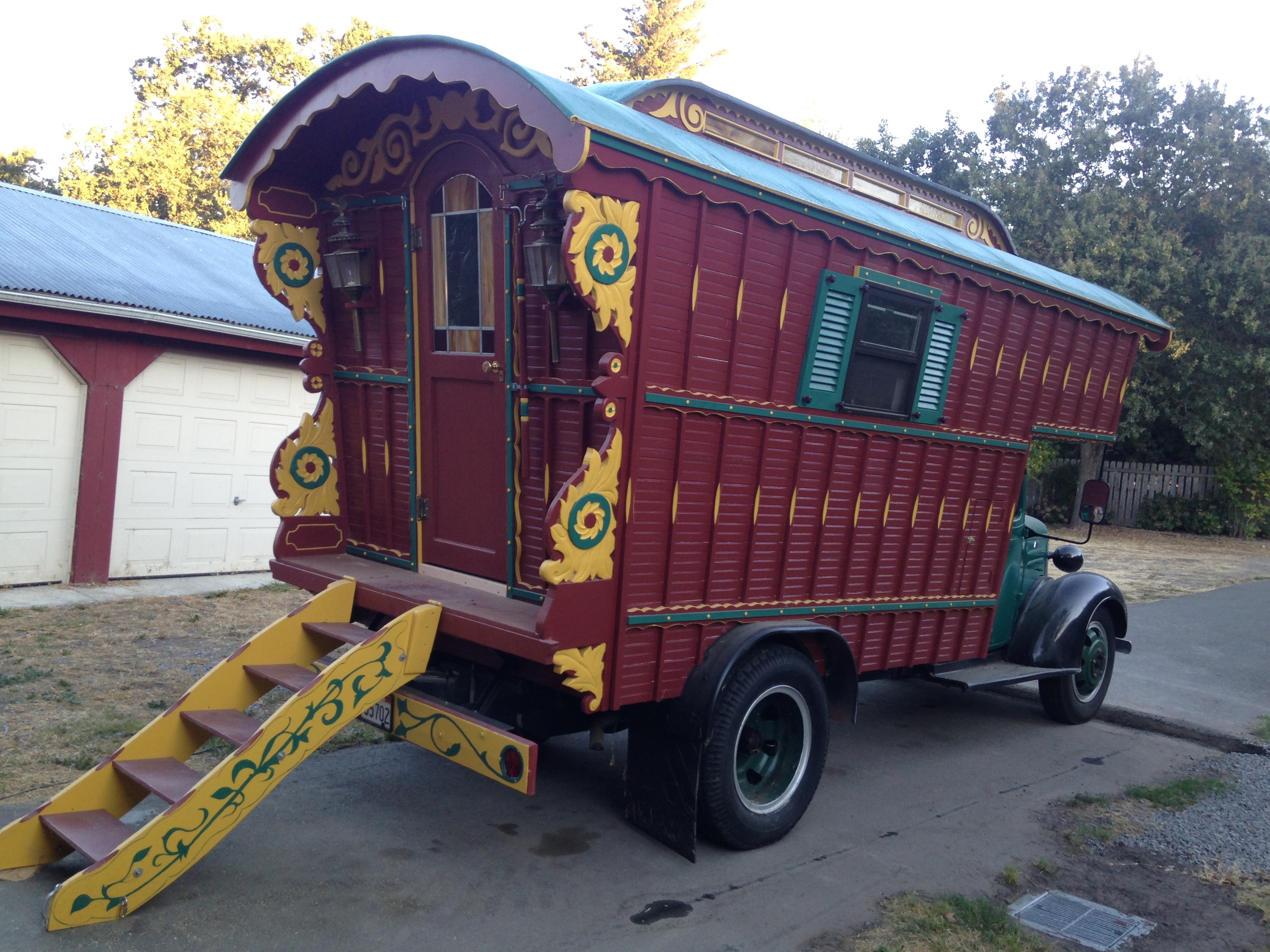 My wife Nancy inspects the door and the carriage lamps. When we have a place to plug in, there is plenty of electric light and power. But there is no house battery system, so otherwise it’s flashlights, propane lanterns, and candles. 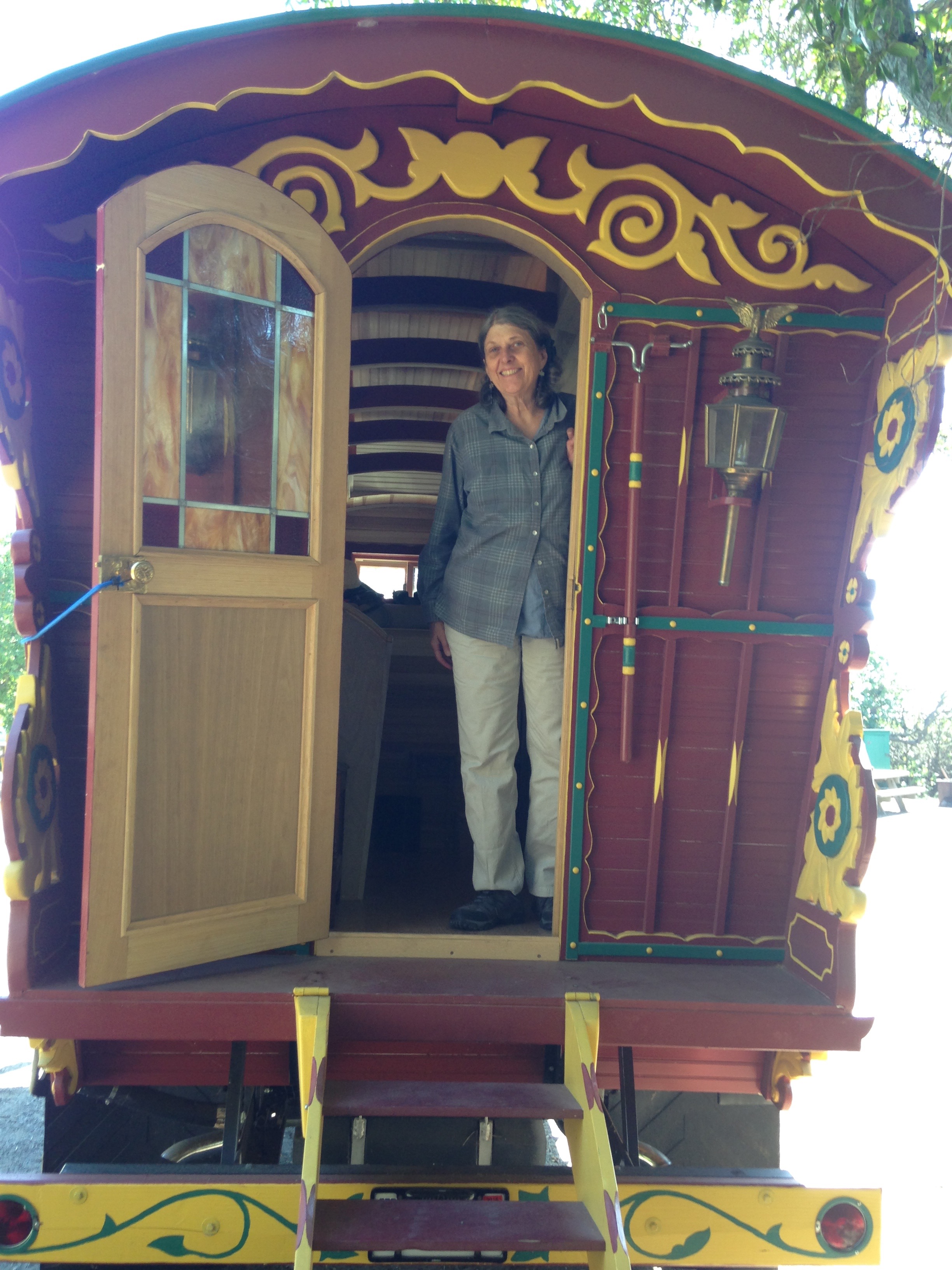 Here’s Nancy on our first camping trip in the caravan. Progress is slow, 45 mph unless you’re on a long downhill. Steering is stiff, ride is bumpy, but we meet a lot of interesting people. 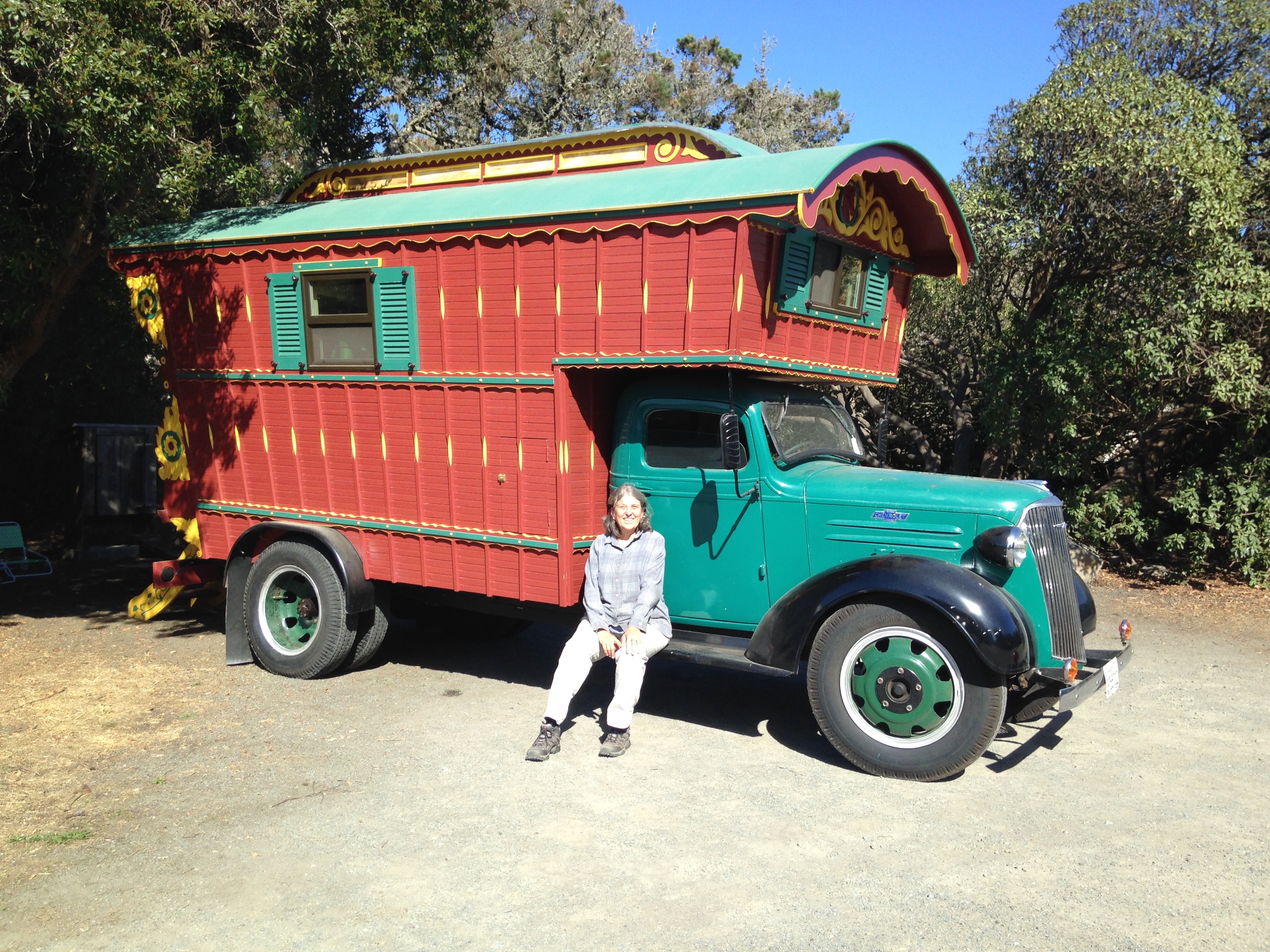